Beauty in the Dark

The places we yearn to be are as different as we who long for them. Faraway places created by lonely fantasies and experiences of anxiety. Like the horizon, our yearnings move with us, disappearing and then reemerging once again. They are spiritual resting places that permit us to dream what we will presumably never see—just as we will never see what is concealed beyond the final horizon because we will never cross it.

Read the essay in German: Die Schönheit im Dunkeln (below)

Beauty in the Dark 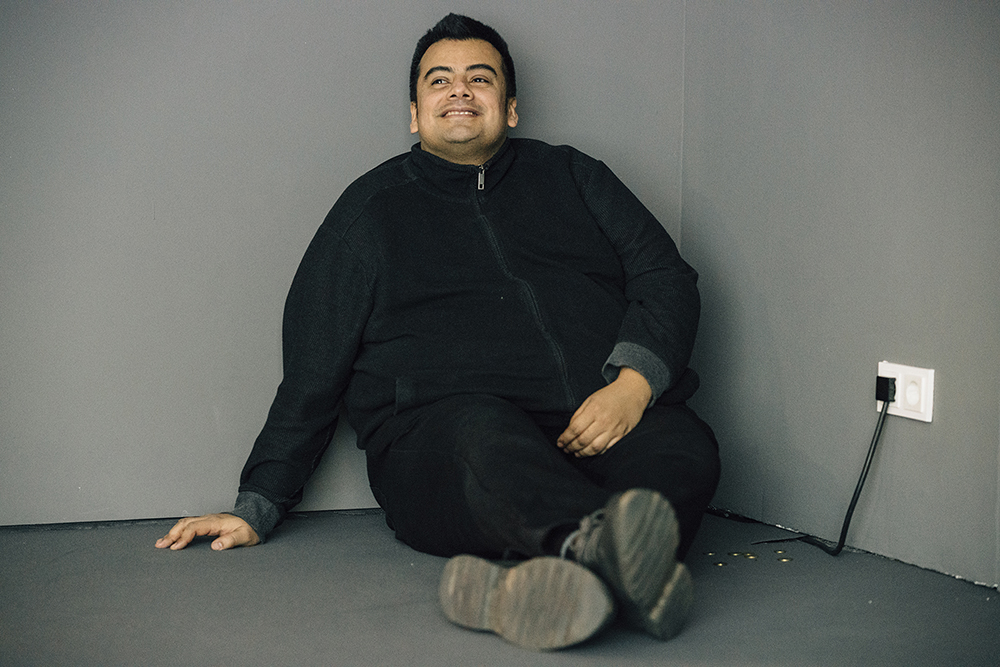 The places we yearn to be are as different as we who long for them. Faraway places created by lonely fantasies and experiences of anxiety. Like the horizon, our yearnings move with us, disappearing and then reemerging once again. They are spiritual resting places that permit us to dream what we will presumably never see—just as we will never see what is concealed beyond the final horizon because we will never cross it.

Yearning is common to all of us but can nonetheless scarcely be grasped. Those looking for longing can find it revealed at the wellsprings of art, literature, and the beautiful. In the arts it becomes possible to enter into and experience imagined worlds, and in some cases they even become the pilgrimage sites of a collective longing.

Naufus Ramírez-Figueroa’s oeuvre is one of these longed-for places. The artist, born in Guatemala in 1978, uses his poetic performances and installations to set free emotions that move us. Viewers become fellow travelers, and Ramírez-Figueroa draws them into a fanciful spiritual landscape. In doing so, he repeatedly alludes to his native country. While a homeland represents a harmonious organic situation in life, for Ramírez-Figueroa the narrative model never occurred in that form.

Before we turn to the works of his solo exhibition Two Flamingos Copulating on a Tin Roof at the Museum Haus Esters in Krefeld, it makes sense to briefly trace the path of the artist’s moving biography. It is precisely in the inner dialectic between work and life that we find the special qualities that make his art unique. Like almost no other artist, Ramírez-Figueroa uses extremely intimate works to open up a universal scope and to point to a path leading far beyond art.

Ramírez-Figueroa was born at the halfway point of the Guatemalan civil war. In 1978 the war had already been raging for 18 years. No one had any idea that the same amount of time would have to pass again before peace would be established. Over 200,000 people fell victim to the fighting between the military dictatorships and the guerrillas. Few people remained unscathed, and the artist’s family was no exception. Those who are born into times of war and are unfamiliar with any peace to serve as a point of reference are able to endure a lot—to a certain extent, even the realities of a civil war. However, with the execution of Ramírez-Figueroa’s uncle, things reached an unbearable point. His grandmother set out to flee to the north with the boy, who was only eight.

They left behind the only reality they knew and a family that the war would tear apart more and more until they finally stood divided against one another and engaged in acts that no one wants to read about here, not to mention personally experience.

Stranded as a political refugee in Vancouver, a new life began. This city on the west coast of Canada became a place of retreat, where he could work through his experiences. The pain of leaving was balanced by the joy of arriving. Ramírez-Figueroa’s youth awaited him—that unavoidable waiting area between dreamy play and dutiful action. Responsibility came sooner than expected, with his grandmother becoming severely ill and requiring daily care. As an adolescent, Ramírez-Figueroa accepted responsibility for her care. And with his dying grandmother, his feeling of a homeland in exile also departed.

Surprisingly, the artist conceals the dramatic coordinates of his own life; throughout Two Flamingos Copulating on a Tin Roof, they are at most suggested. 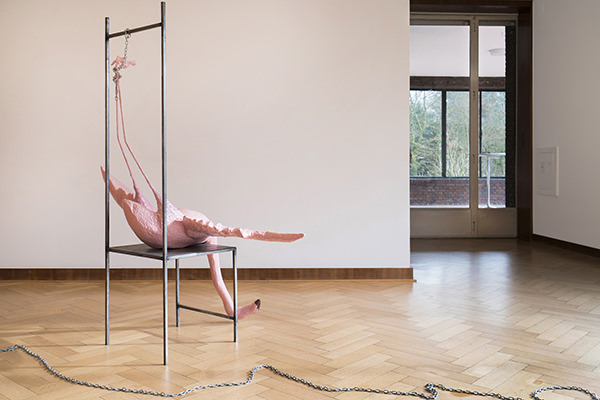 The path of anyone entering the exhibition is first blocked by five bound flamingos (Fettered Flamingos). The fragile bipeds, formed out of Styrofoam and covered in pink enamel, twist around as though they want to free themselves from the chains lying around them and flee. Those who look closely will not fail to notice that the slightly deformed creatures look as though they had long since lost their minds. The attempt to set out for new lagoons seems hopeless. Their house arrest has metamorphosed into a new normality—as though they had arranged themselves with and resigned themselves to the reality of their lives. 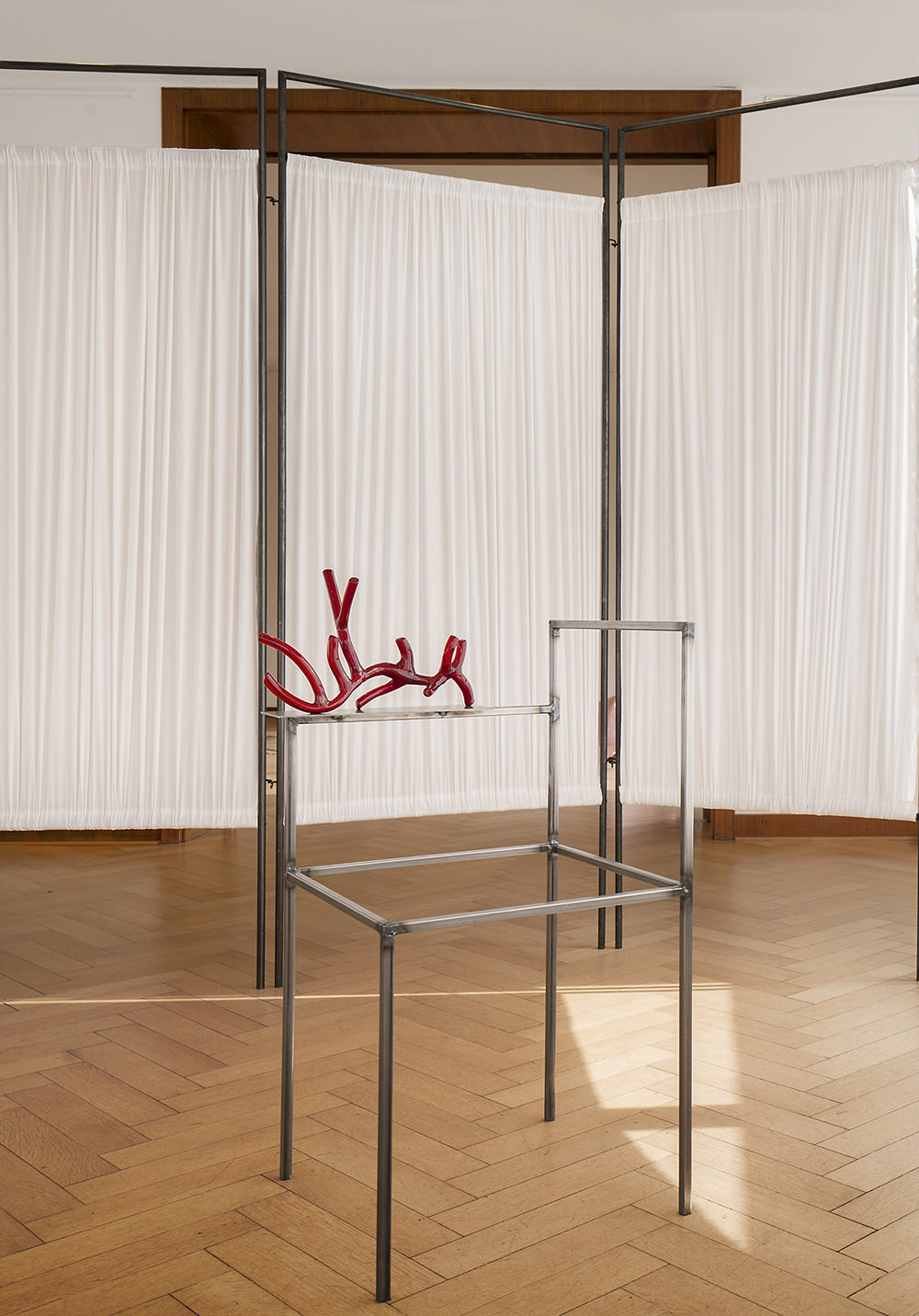 Folding partitions stand in a second room, arranged in a circle to protect their interior from view. They subliminally recall a station for medical care and initially conceal more than they reveal. A gap in the row of partitions lures to the inside, where one finds a delicately constructed bloodletting chair. On its armrest is a red glass sculpture in the form of an oversized blood vessel and reminiscent of a piece of coral, corresponding to the work’s name: Liquid Coral. The fragility of the tubular structure has a decelerating effect: In order to take everything in, one must reverently creep in a circle around the chair and the blown-glass sculpture. This generates an intimacy that is overwhelmingly omnipresent—all the more so because the antiquated notion of bloodletting for healing ailments of any kind seems bizarre today and was nonetheless practiced for centuries. This glass sculpture is made of extremely rare, melted-down, red church-window glass, which originally served to divide inside from outside and the worldly from the otherworldly. 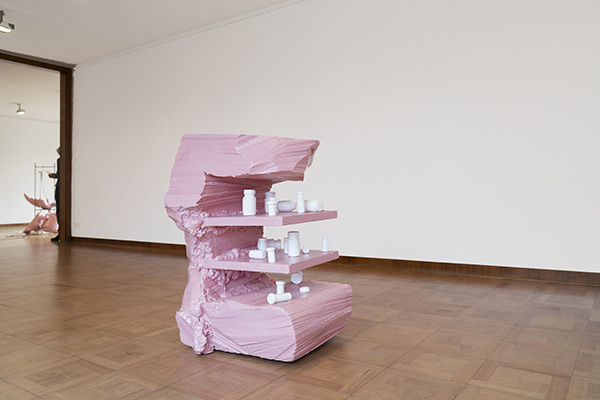 An additional room reveals a peculiar medicine cabinet formed out of roughly worked pink Styrofoam and filled with abstract versions of white containers for storing medicine. The work, Shelf with Medicine Bottles, calls to mind a nervous yearning to be “healed” or the wish to delay what comes at the end of life. The arrangement of the medicine bottles suggests that someone was searching for a cure in a hurry and carelessly rifled through the cabinet. Life as an eternal health-care situation is not anyone’s aspiration, but it is more and more frequently becoming a reality. Consider continuous efforts to keep the constantly aging human body alive as long as possible. Ramírez-Figueroa assures me that suffering also means feeling alive and points to the narrative staging of the foot stepping out of the medicine cabinet.

The installation speaks to the world through an honest sensibility that depicts what people persistently try to ignore with an optimism based on the progress of technology and medicine: that people, as living creatures, are subject to the morbidly gnawing conditions of time—regardless of all the yearning. 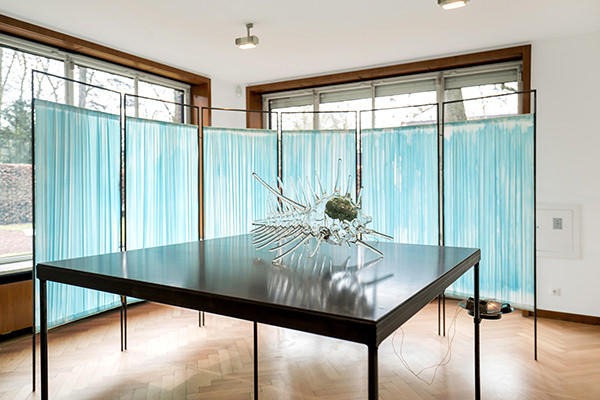 A further room once again contains an intimate, almost stage-like arrangement of partitions—this time with the fabric dyed blue. In the center is a Venus comb murex (Murex pecten), an extremely fragile sea creature that the artist has had produced from transparent glass. It is modeled on the illustrative watercolor drawings that very often stand at the beginning of his creative process. The work is titled Comb Bound Sound. The dampened sound of music emerges out of the rock snail’s insides. Listen closely and recognize a fandango melody, which causes the spiny shell to vibrate slightly. Fandango is a Spanish-sung dance whose name can be traced etymologically to fandanguero, a word for slaves who secretly performed dances and supposedly brought about a nocturnal tumult. Ramírez-Figueroa has chosen an interpretation by the U.S. harpsichordist Scott Ross, who passed away at far too young an age from complications caused by AIDS and kept his own yearnings and desires concealed, with the result that many of them never clearly resonated through to the outside world.

Every one of Ramírez-Figueroa’s works digs down to unearth deeper geological strata of life and then pauses there. The fact that someone is talking about himself and his life here—without uttering a single word about them—can also be recognized in the exhibition.

His fleeting dream worlds show us where we expect to find beauty but don’t see it. In searching for this beauty, we are rewarded with the feeling that we have found it—as though we were standing opposite beauty for a brief moment within the darkness. Surrounded by the memories and fantasies of one of contemporary art’s most unconventional artists, he teaches us—like no other—that we do not have to see beauty to know that it is indestructible.

The essay has been written by Sandino Scheidegger on the occasion of Naufus Ramírez-Figueroa’s solo exhibition Two Flamingos Copulating on a Tin Roof at the Museum Haus Esters in Krefeld. The exhibition was curated by Dorothee Mosters.