Life—or what we generally understand it to be—is a series of moments. There are the rare loud instants and the occasional quiet breaths, but mostly the moments are scarcely audible. Often, is it these seemingly unremarkable moments, ones which are neither preceded by forethought nor directly followed by reflection, that mark the beginning of change.

Read the essay in German: Reise ohne Geografie (below)

Life—or what we generally understand it to be—is a series of moments. There are the rare loud instants and the occasional quiet breaths, but mostly the moments are scarcely audible. Often, is it these seemingly unremarkable moments, ones which are neither preceded by forethought nor directly followed by reflection, that mark the beginning of change.

What follows is an attempt at tracing the unremarkable moments in the life of Costa Rican artist Federico Herrero , who has for almost two decades resolutely sought these kinds of instances, enjoyed them quietly, and transposed them into a powerful, unbounded pictorial space like no one has done before. Serene and unhurried, Herrero translates everyday life into art, achieving a refreshing deceleration in an increasingly fast-paced art world.

There is no need to brave Costa Rica’s tropical heat to enjoy Herrero’s art. His expansive paintings have been gracing the walls of the world’s most important museums and art fairs with their unmistakable radiance for years. Because of this, I was all the more surprised when I met him for the first time at Zurich’s airport to pick him up for an exhibition. Here was a shy, thoughtful individual who introduced himself as reticently as a humble house painter reporting for work. It was as though he hadn’t at all noticed that the art world—or at the very least those who are widely considered representatives of the community—regard him as one of Latin America’s most important artists.

This rise to acclaim was marked by the 2001 Venice Biennale. There, at the age of 23, he was honored with the Special Prize for Young Artists. This distinction was also preceded by a thoroughly unspectacular moment. If the following anecdote behind this prize were to be given a tabloid headline, it might read: Super-Über-Curator Breaks a Sweat in the Tropics. However, reality is rarely ever able to keep up with the thirst for sensationalism.

It began in 2000, when Swiss curator Harald Szeemann travelled to Costa Rica. While he had long since taken his place on the Olympus of Western art history, by then just the smallest echo of his name had reached the tropics and only within the most European-oriented artistic circles.

In fact, I imagine Szeemann’s visit to the local studio, where he had been invited by the curator Virginia Pérez-Ratton, as rather uneventful. Those of you picturing a momentous encounter of the ostensibly unknown curator with the young, Costa Rican artist in a sun-filled studio are in for a disappointment. There was no meeting, not yet, because Herrero was out.

The story ends even more unspectacularly in a storage room on the lower level of a gallery in the Costa Rican capital of San José. Szeemann was visiting Jacob Karpio, head of what was then the country’s only internationally-oriented art gallery, where a handful of Herrero’s paintings still lingered following a long concluded exhibition.

Karpio recalls how Szeemann drank in one of the colorful painting before declaring he had not been thus stirred by a piece since his first look at a work by Willem de Kooning, one of Abstract Expressionism’s most important protagonists. Two weeks later, the Szeemann called from Europe. Although the list of artists had already been finalized for the upcoming Venice Biennale, which he was curating, he wanted to add Herrero nonetheless. And thus, Szeemann spontaneously invited Federico Herrero to Venice.

For Herrero, Italy’s northeastern city on the lagoon would become the starting point of his voyage of discovery. This is where he first encountered the Western European art circus, a circus which had up to that point only rarely made stops in Costa Rica. Earning the distinction of the best young artist at the Biennale crowned this opening scene.

An unexpected increase in attention would cause a shift in the reality and dreams of any young artist. This was certainly the case for the young Herrero. While he went on painting continuously in his studio, he also began travelling the world with his roller and brush, creating wall paintings and other site-specific works commissioned by public collections and institutions (as a matter of principle, he refused to do the same for private collections). However, it was not just the artist who had to learn to deal with an increase in attention. The galleries also had to learn to work with someone who largely avoided the limelight and was sometimes even too shy to appear at his own exhibition openings, much to the surprise of all his collectors and friends. He would often to do things like explore the city alone on foot instead.

He recently assured me that he has since learned to be present for openings.

The artist has never much considered shifting the focal point of his life to the places where his paintings hang on the walls of collectors and private institutions an option. The one exception was his moving to New York, where he went to study. However, this attempt at a life away from his homeland was broken off after just one semester when he began to realize that the art world coupled with the art market represented an equation that just didn’t add up for him.

Creating art requires time for quiet reflection and rest—a combined harmony only rarely found in New York, the city that never sleeps. As such, his further trips abroad have been more like strolls in the fresh air, always ending where they begin: en su casa in Costa Rica.

Two fundamentally different dispositions can often be identified among artists. Some travel around the world and find inspiration for their work in the constant changing and shifting in the focal points of their lives. Travel as the fertile source of all experiences, detachment as the essence of freedom, memories as the waypoints of life.

This is a contemporary life model sustained by the kind of progress that is often glorified and better suited for the accelerated rhythm of everyday life. Standing still is seen as an unproductive doldrum; like boredom, it is scarcely endurable.

For me, Herrero is an exemplary embodiment of the second type of artist, who find themselves on an entirely different journey. They are on their way to themselves, on a voyage without geography, without tangible distance, but with a clear destination. This path progresses not by way of accumulation and diversity, but by way of reduction and routine. It is a movement sustained by moments of calm.

Most writers presumably know moments of this kind: lonely thoughts that form slowly and quietly, taking shape only when they are assembled in sequence. It is in this way that, over time, a profoundly independent artist can emerge, one who is able to escape outside appropriations of his or her work.

Anyone who visits Herrero, walks through his round front door, and spends a night in his unconventional house will know the calm of which I speak, the calm of the routine. It comes in many forms, such as the gentle caressing sounds that can be heard in the early morning, just audible enough to stir guests from their sleep. Those who track down the source of this rustling will find the painter, broom in hand, carrying out his morning ritual of gathering leaves and petals from the patio. Day in and day out, Herrero happily goes over this surface with systematic sweeping motions, like a warm-up exercise for the brush strokes to come.

The leaves and petals fall from the overgrown garden that separates the house from the studio. Like a little rain forest, it provides shade for the latter and, as the sun travels across the sky, it conjures up a captivating shadow theater that incorporates its surroundings, the impression of which can often be recognized in Herrero’s works.

Only a garage door indicates the studio’s original function. Like the house, it is furnished in a manner that we could call extremely minimalistic—or simply humble. Its luxury consists solely in the space and light that enable him to work simultaneously on multiple large-scale paintings.

Colorful fields of neighboring, delimiting, and overlapping hues develop out of the fleeting encounters of shapes and colors. If we take the works’ titles into account, they often permit semi-abstract inferences based on the artist’s unique projections. These are not forced on us. At most, they are gentle suggestions.

Anyone comparing Herrero’s works from the last decade will note the great subtlety of the interaction between their precisely defined vocabulary and the dynamic syntax within which it is utilized.

Herrero’s inventiveness within his self-imposed limitations of color and form is consistently astounding. What looks random is in actuality derived from a regimen that has been nurtured by the artist’s intuition for years. Through this, Herrero always begins from a perspective of unbounded pictorial space, where memories and fantasies are united and images are permitted to remove themselves from any kind of pattern, often transcending the confines of the canvas.

In this way, his paintings become installations that fill entire rooms, spreading across walls, floors, and ceilings, ultimately vibrantly fusing site and work.

It is as if the artist were rebelling against the canvas itself in order to find his way back to the elemental originality of painting—painting that is not defined by what it depicts and how but thrives instead on the substance of individual elements and their interrelationships.

Those who are aware of Herrero’s art and attentively make their way through everyday life will sooner or later find themselves reminded of his paintings in increasingly unexpected places.

These are places the artist has never visited and never painted: urban areas, namely, which seem to exist only when observed. Hidden corners behind buildings, unremarkable curbs in parking lots, plain facades and surfaces where colorful harmonious forms present themselves only to those who are mindful enough to see them. Witnesses to their time, whose existence is pure happenstance. They nonetheless harbor stories we can only guess at.

It is through observations of precisely this kind that we arrange and prepare the world for ourselves, shifting our focus to what would otherwise have escaped just beyond the limits of our attention. In this way, a distinctive form of knowledge and orientation develops, which—like Herrero's art—shifts the processes of vision into the foreground. And it is precisely there where we are constantly moving and getting lost: in the realm of everyday life. 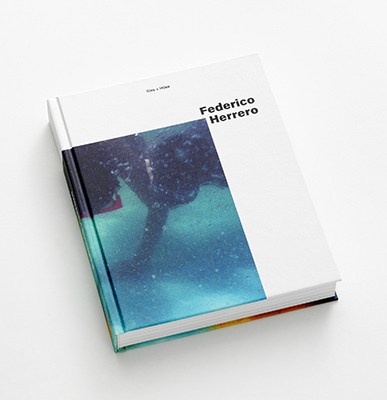 Federico Herrero (born 1978) is considered one of the most important contemporary artists in Central America today. He lives and works in Costa Rica. Solo exhibitions were held at La casa encendida, Madrid; 21st Century Art Museum, Kanazawa, Japan; Contemporary Art Gallery, Vancouver; Casa de America, Madrid; Kunstverein Freiburg, Germany and CCA Wattis Institute for Contemporary Arts, San Francisco. His work has been featured in group exhibitions at the Venice Biennale, the Havana Biennial or the Solomon R. Guggenheim Museum, New York or at the Saatchi Gallery, London. All photos of Herrero by the author, except image with Szeemann (courtesy by the artist).